It has never been a more important time than now to be an educated consumer when it comes to joint health. In previous generations, perhaps as recently as your parents, bad backs, knees, hips, and other joints have relegated those in their forties, fifties and sixties to decades of restricted mobility.

There are so many options, so many decisions to make, that will affect the quality of your life for years to come, that will determine whether you get to live happily ever after.

Consumers will have to be more informed than ever in conquering, or a least living with, joint and back pain.

Educated consumers have to choose what is best for them.  Joint pain is a growing dilemma and it isn’t going anywhere.  Patients have to decide whether they want to treat what’s causing the problem — which is almost always a mechanical issue— or whether they what to wait until significant deterioration occurs and choose their fate?

Knee and hip surgery and replacements are becoming commonplace, with the latter already among the most routinely performed surgeries, approaching 10 million men and women with these implants. Many of them are young enough that they may face replacements of their replacements 20 to 30 years down the road.

Then there are those millions of Americans with ongoing back pain. Those who suffer with it are getting younger, and it is already the leading cause of disability in adults under the age of 45. And, yes, spinal implants of sections of vertebrae are already here.

Medicine has evolved into more treatments of the consequences of these conditions, but only physical therapy and mechanical adjustments can treat the mechanical dysfunction that created the problem in the first place.

It is also true medical advances will continue and that they will become less invasive and less traumatic at doing the same old thing — treating by masking the effects of the ailment once prevention or structural rehabilitation is no longer feasible. 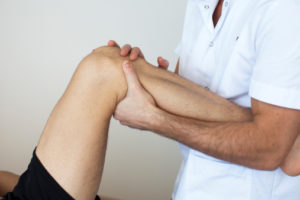 Mechanical treatments like chiropractic care and physical therapy are superior because they stimulate the body to repair itself, at the same time recovering the initial painful condition and redirecting it on a more healthful trajectory.

Joint pain leading to disability is a dilemma for a growing number of Americans in their forties, fifties, sixties, and seventies. That means increasing millions of people are soon going to have to make choices, including surgery, physical therapy, chiropractic modalities and even stem cell treatment in the coming decades.

According to researchers at the U. S. Centers for Disease Control and Prevention, there are an estimated 15 million people in the United States suffering from severe joint pain.  Going by the pain scale many doctors use— with zero representing no pain and 10 being the worst possible pain— anything seven or higher is in the severe range.

Then there are those in the moderate range of four to seven on the scale, many of whom will shortly be suffering severe joint pain. Now is the time for them to start making educated decisions.