“After giving birth to my third baby boy, I developed a severe case of carpal tunnel syndrome. My fingers were totally numbed. My first thought was either cortisone shots or surgery. Then I came across Dr. Butler’s practice. After a series of adjustments and intensive physical therapy, my symptoms are almost entirely gone. The office staff is very friendly and welcoming. Also, they handle insurance matters so you don’t have to worry about it. They ALWAYS discuss it with you upfront so there are no surprises. Did I mention they serve delicious cookies? If you experience any problems with your spinal chord, I strongly recommend Oakland Spine and Rehabilitation Center. They go above and beyond to fix your problem!”

“My family has been lucky enough to be patients of Dr. Brad for about 15 years. The times he has helped us are too many to name! He has eased my husband’s pain as a result of an injury, helped my sons and I who suffered from headaches, and kept our family healthy with regular care. Additionally, he has been there when we faced other medical issues with the support and respect it is hard to find today in the medical field. With the addition of acupuncture and Aaron, I can honestly say my life has been changed once again for the better by Oakland Spine and rehab. This office breathes wellness physically, mentally, and spiritually. Thank you!”

“When I first came to Dr. Butler’s office, I had been to several specialists. I had undergone MRI and it was determined I had three herniated discs. One in particular was causing all the pain I have had. It was constant in the back of my right thigh and numbness in my right foot. The pain would shift depending if I was sitting or standing rapidly becoming unbearable. I had gone to doctors for consultation and epidural shots none of which worked. I was also prescribed celebrex which also was ineffective. After my last consultation I was told surgery was my only option.

While searching through my medical plan website looking for doctors for surgery I saw one of Dr. Butler I also saw an ad for him in The Bergen Record Sports section. I called the office and setup an appointment. Dr. Butler explained to me how the pain was happening and what could be done to correct it. I was a bit skeptical at first but did the two complimentary treatments. After the second one…I felt a lot better the next day…I was able to move around pain free under no medication what so ever. Additionally the staff at the Oakland Spine Center is extremely friendly, especially (Jen, Kirstin).

I highly recommend Dr. Brad Butler and Dr. Jeff Wells to anyone that has any neck and back pain.”

“Love the entire crew at Oakland Spine P.T. It’s a fun and happy place to hear. These guys did a great job of getting my shoulder in ready for surgery and then getting it rehabbed to 100% afterwards! Thanks for the fantastic support.” 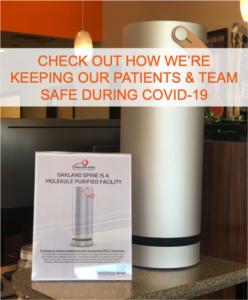